You may want to use a knife on your Blackstone griddle for various reasons. It could be slicing your food into smaller pieces for faster cooking or cutting open some pieces to see if they are cooked.

You may also want to slice your cooked food, into edible pieces, on the griddle top. Doing so prevents food contamination and dirtying more utensils.

Are there potential repercussions now that you can use a knife on your griddle? Can it harm or damage the cooktop?

Can You Use a Knife on a Blackstone?

You can cut on your griddle top for it will not harm it. The cast iron griddle top is sturdy enough to handle a little cutting and chopping. Nonetheless, you will end up with a dull knife.

Can You Cut on a Blackstone Griddle?

Many people tend to ask this question before trying it for themselves. The reason is obvious; no one is ready to risk damaging their valuable griddle.

According to Blackstone, there is no harm in using a knife to cut on your griddle top. While that is 100 percent correct, there are some potential damages likely to result from repeatedly cutting on your griddle.

Technically, using a knife on your cooktop will not ruin the griddle’s metal. But it can damage the seasoning layer. As a result, you will face a dire need to re-season your griddle.

Cutting on a flat top griddle leaves thin cut lines on the seasoned surface. If you make it a habit, you will notice that the spots where you cut food become less non-stick.

When the non-stick layer deteriorates, the surface becomes more prone to rust, and food easily sticks. The only way to fix this damage is by re-seasoning your griddle, which is a bit of work.

Although you can use a knife on your griddle top, I don’t recommend making it a habit.

Will I Damage My Knife If I Cut on a Blackstone Griddle?

Cutting on a Blackstone with a knife might not be the best idea.

Using your knife on a griddle can dull the blade. The more you use it, the blunter it gets; before long, it loses its cutting capabilities.

Of course, you can sharpen a dull knife, but we discourage frequent use on a griddle.

Alternatives to Using a Knife on a Blackstone Griddle

Do you want to keep re-seasoning your griddle every other week? Of course not! That is why you should not cut on your griddle often with a knife.

So what alternative is safer and works better for your griddle top?

A griddle spatula is the best alternative to use instead of a knife. The spatula has a sharpened edge, perfect for slicing food or splitting it open. It is also durable and heat resistant; thus, it won’t get damaged by the griddle heat.

The best thing about griddle spatulas is that although they are sharp, they are not sharp enough to damage the seasoning layer. Unlike knives, they are specifically designed to use on a hot griddle.

Another alternative is to use a chopping board to slice vegetables and meat right before serving.

Blackstone has a wooden cutting board designed to be used on the hot griddle top. It has a length of 11.5 inches, a height of 2 inches, and a width of 12 inches.

This griddle accessory has four small feet to prevent it from lying flat on the cooktop. The feet give it enough traction, allowing you to cut on it with confidence.

When handling tough pieces of meat that require a bit of effort to cut, I would recommend you use the Blackstone cutting board. This way, you won’t worry about scratching the delicate seasoning layer with a knife.

Blackstone also has silicone cutting boards designed for the 36-inch outdoor griddles. This board fits perfectly on the griddle’s side table. It allows you to cut veggies and meat on the griddle side, making it easy wito work in batches.

Silicone is sturdy and rigid, thus more friendly to knives. It is also easy to clean, so you don’t need to worry about cross-contamination.

Can You Cut Meat on a Griddle?

Yes, you can cut steak and meat on a griddle. If the meat is tough, a knife would be ideal to use. But if you are cutting tender pieces of meat, consider using a griddle spatula.

Ensure that there is enough hot oil under the meat when cutting it. The oil helps reduce the risk of scratching the seasoning.

Can you use knives on a Blackstone griddle?

Yes, you can use a knife on your griddle cooktop without causing any damage to the metallic surface. However, doing so will dull your knife and potentially create thin cut lines on the cooktop seasoning. 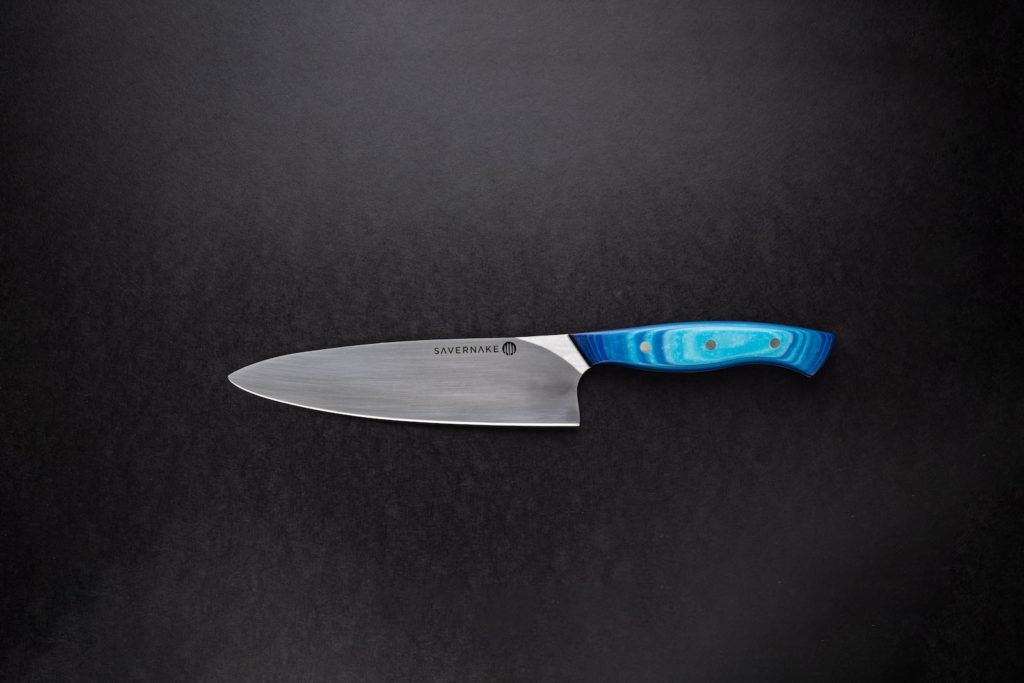 What utensils can you use on a Blackstone griddle?

A metal spatula and scrapper are the primary utensils to use on a griddle. The spatula is ideal for flipping food as it cooks. The scrapper aids in removing/ scrapping off food remains from the cooktop before cleaning. Other utensils include; a hamburger turner, chopper, and tongs.

Can you cut meat on top of Blackstone?

Yes, you can cut any meat on a Blackstone cooktop. If your meat is tender, you can use a spatula but if it’s tough, use a knife.

Can you use metal on a Blackstone griddle?

Yes, it is safe to use metal on a cast iron griddle, mainly spatulas, and scrappers. If you want to use a pan or pot on a hot griddle surface, it is preferable to use cast iron only. Griddles can get extremely hot, and only cast iron can withstand the heat without warping or melting.

Although you can cut on your Blackstone griddle top, it is likely to dull your knife and scratch the seasoning layer.

For this reason, it is advisable to minimize the frequency of cutting on your griddle plate with a knife. Don’t make it a habit!

Even better, you can use a griddle spatula instead of a knife. The spatula has a sharp edge that is perfect for slicing food. You can also purchase a Blackstone cutting board for slicing meat and veggies.

Sorry, we are closed.